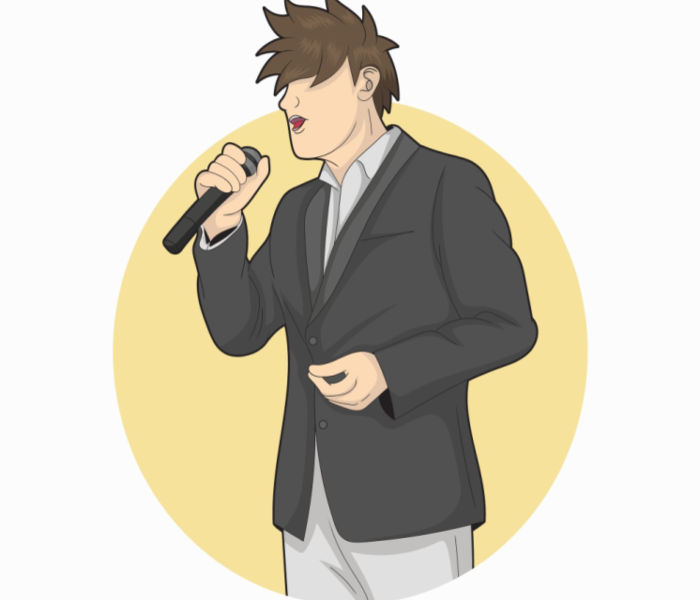 Are you blessed with a deep voice? If you have been struggling to find songs that compliment your voice, then you are in the right place.

We have 25 great songs for you to try out on your next Karaoke outing or audition. Take a look at the following top picks on our list:

Originally written by Trent Reznor from Nine Inch Nails, this is one of the many classics that Johnny Cash is known for. The critics simply loved the calm voice tone that the award-winning musician employed on this rendition.

Hurt is a very emotional song that will allow you to speak directly to the heart of your audience, especially if you can try to emulate the deep melancholy that Cash is famous for using in his songs.

Next: Greatest death songs (songs about death and/or grieving)

2. Never Gonna Give You Up – Rick Astley

There is something about a love song and deep voices that feels like a great combination of fine wine and good cheese. That is certainly true for Never Gonna Give You Up by Rick Astley.

The fascinating thing about this song is that it is unusually fast-paced for a deep voice song, but for some reason, it just works out beautifully. This is a guaranteed crowd pleaser for any Karaoke party, especially if you can copy Astley’s fancy moves!

Metallica is well known for its ballads, and The Unforgiven 2 is certainly right up there with one of its best hits. James Hetfield has the sort of voice that commands authority and his performance on this song does justice to the heartfelt lyrics. You can try it for yourself and let your deep voice ride the trademark instrumentals loved by the heavy metal band.

To say this Bill Withers break-through performance is a classic does not do it justice. It is an intricate blend of R&B, soul, and blues, all brought to life effortlessly by the deep voice of the master himself.

If you want a song that will take your audience back to simpler days, then Ain’t No Sunshine is the song for you.

Next: Our list of songs for men to sing for karaoke

Freddie Mercury, the lead singer of Queen, was known for his many musical talents, but when you think of singers with deep voices, he is not the first to come to mind.

However, if you manage to lend your deep voice to the fantastic lyrics and calm pace of Crazy Little Thing Called Love, the results will be something really special. Leave your audience wanting more of one of Mercury’s many great offerings.

You would have a hard time matching Jimi Hendrix on the guitar, but with your deep voice, you can do justice to the masterpiece that is Purple Haze. Short as his career was, Hendrix still managed to leave the world with a lot of songs to remember him by. Of all his performances, Purple Haze seems particularly suited to singers with a deep voice, such as yours.

No list of deep-voiced singers would ever be complete without the King himself. Elvis Presley was well known mostly for his voice rather than his lyrics. However, do not let that intimidate you, because Don’t Be Cruel is the kind of song that will sound good in just about any deep voice.

The lyrics are easy to sing, and as a bonus, it’s a Presley song, so we doubt that you will be able to reach the halfway point before everyone joins in!

There is a reason why Johnny Cash left such a mark in the musical world, and that is because everyone loves a good story. In this deeply felt story of a young and brash cowboy, Johnny outdid himself. If you want a nice calm song that will capture the imagination of your audience, then try Don’t Take Your Guns to Town.

This heart-wrenching song by Pearl Jam is enough to break your listeners’ hearts, so do not be surprised if you see a few tears in your audience. The story behind this song is about a high school student who shot himself in front of his classmates, and the sad lyrics make for a perfect backdrop to your deep voice.

10. Are You Lonesome Tonight – Elvis Presley

No one expresses a broken heart in quite the same way as Elvis Presley, and the King’s second addition to our list, Are You Lonesome Tonight, shows us why. One sure way to connect with your audience is to sing about something they can relate to. Anyone who has ever been in love will find themselves wanting to sing along after a few notes of this classic.

Deep voices and storytelling are not just a thing of the past, as proven by Toby Keith in his chart-topping hit I Love This Bar. If you can imagine yourself singing this song to an audience enjoying their downtime in their favorite bar, then you will see why this is a perfect song for Karaoke night. The simple lyrics and slow pace will allow you to focus more on the music than anything else.

Another modern offering is Human, by Rag N’ Bone Man. This artist is not as well known as some of the others on this list, but this hit song was an absolute masterpiece. In fact, it actually has more than a billion views on YouTube, and the singer’s deep voice is one of the main reasons why.

The modern lyrics are blended magnificently with a great and powerful voice. If you are thinking of going for an audition, and you want something a bit different from the usual classics, try this one out.

Deep voices can be smooth and beautiful too, as shown by Josh Turner in his song Your Man. This is a great love song, and the ladies in the audience will definitely love it. The song was recorded and released in 2005, and in 2006 it managed to reach number one on the US Billboard charts.

Next: Top tenor songs for auditions and/or karaoke

If you are looking for an impressive baritone song that will wow your audience, then try Lips of an Angel by Hinder. It is an alternative rock song that the lead singer Austin Winkler manages to deliver to perfection. This is a great choice if you want to give your listeners a good song that they may not be too familiar with.

Next: Top songs for baritones to sing for karaoke or auditions

Simple Man is a story that will resonate with every member of your audience because it speaks about one of the most powerful emotions in humans. The love between a mother and her child.

In this deep and heartbreaking ballad, Lynyrd Skynyrd tells of a mother giving advice to her only son. You need to slow down and let your deep voice take over in this one, and the results will be magical.

Next: Greatest overall karaoke songs of all time

Riders on the Storm is a very quiet and broody song by the group, The Doors. It has a very dark feel about it, and the lyrics are far from being joyous.

However, if you can handle the dark subject matter, what you will find is a song that is well suited to your deep voice. You will not need to strain your vocal cords at all with this sad but powerful song.

Is there anything more heartbreaking than the end of a wonderful romance? The master, B.B King, tells the story of a love that has died in such a way that you cannot help but feel his emotion and pain.

The Thrill Is Gone is considered by many to be the pinnacle of what blues really ought to be, so if you think your audience may have a taste for the blues, then this is a great choice. The Thrill Is Gone has been sung many times over by various artists since its release in 1970.

It is probably because of this song in particular that the Canadian band, The Crash Test Dummies is so well known. It was released in 1993 and immediately took the world by storm.

The song topped the charts in several countries all over the world, even non-English speaking countries. This only goes to show how powerful the deep voices and instrumentals on Mmm Mmm Mmm Mmm really were.

Ask any Billy Idol fan about their favorite song, and they will probably start by singing “hey little sister,” the iconic lyrics from the hit song White Wedding. If you love rock music, then this song is the perfect partner for your deep voice. Thanks to the wonderful lyrics, White Wedding is guaranteed to be a crowd pleaser.

Another great song from the band The Doors is the very popular Light My Fire. In this powerful performance, the lead singer Jim Morrison outdoes himself with a masterful use of his baritone voice. The song was so well received that it will probably be recognizable before you finish singing the first few words.

In the hit song Can’t Get Enough of Your Love, Babe, Barry White again shows why he is regarded by many to be the best deep voice singer ever. He somehow manages to make the song sound heartfelt, despite his tremendous rumbling voice that has been known to leave the ladies screaming for more. If you can similarly control your voice, you can be sure to produce an unforgettable performance

22. Wherever You Will Go – The Calling

This was the first single of the popular band The Calling, which was responsible for propelling them to instant stardom. Those who are not familiar with the group are usually in for a surprise when they hear the deep voices and mellow tunes for the first time. Wherever You Will Go reached as high as number five on the Billboard 100 in 2001.

Originally written by the legendary Oscar Hammerstein II, Ol’ Man River has had many different versions sung by various artists around the world.

However, out of all these renditions, the stand-out performance is undoubtedly from Paul Robeson. While he is a very capable singer in his own right, one of the chief reasons for the popularity of Robeson’s performance is his deep voice.

If you are looking for an absolute classic that seems written for deep voices, then this is the song for you.

Josh Turner makes a second appearance on our list with the modern yet timeless Lay low. This actually goes to show that for a singer with a deep voice, you can’t go wrong with a Josh Turner song. His music has that peculiar slow pace and heartfelt performance that will only serve to complement baritone voices.

With such a list of famous names and great performances, it is difficult to find a song and artist befitting to bring the curtain down.

However, if anyone deserves that honor, it is the great Barry White. His song Just the Way You Are will remain a classic for years to come. There is no better way to pay tribute to the legendary singer than to lend your deep voice to this masterpiece.