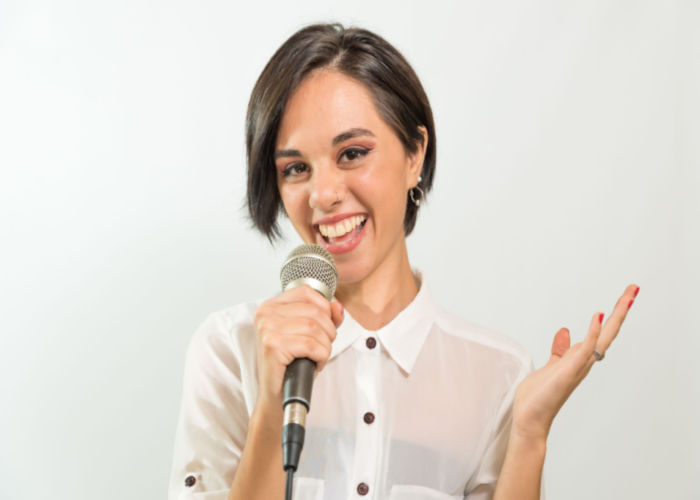 Karaoke is one of the most popular pastimes, but many people find the thought of singing in front of an audience extremely intimidating—especially if they’re not great singers.

If you’re one of those nervous singers, or if you know that you’re not a good enough singer to tackle Whitney Houston or John Legend, keep reading. We’ve put together a list of easy karaoke songs that will have the bar singing along with you and cheering you on.

No one is entirely sure how this happened, but nearly every person in the English-speaking world knows the words to this song. The verses are simple, and it’s a fairly simple song to sing even if you’re not a confident performer. Add a little energy to your performance, and the crowd will eat it up.

Next: The best karaoke songs ever (choose one of these hits)

This song is arguably one of the most iconic songs in pop culture history and is a must for any karaoke setlist. Whether you’re trying to liven up the crowd or you’re looking for something that suits your lower voice range, you can’t go wrong with “Bad Romance”. Just make sure you know the lyrics—it’s the only way to do this song justice.

Next: Top songs for soprano singers to sing for karaoke

Although nearly everything Adam Lavine sings is a challenge thanks to his swoon-worthy falsetto, this Maroon 5 hit is not one of those songs. Even if you’re not a great singer, you’ll sound confident and collected belting out this easy yet impressive tune.

With no key changes and easy lyrics, this song will give you a chance to add flair to your performance and get the crowd excited. Pick this song if you want to sing something lively without having to worry about keeping up with a melody.

With the first line being, “Let’s go girls!”, there is no way you can have a girl’s night at a karaoke bar without this country-pop hit. Even if you’re not the strongest singer, belting out this song is sure to bring the room to its feet and have all of the other women in the crowd cheering you on. Have fun with it!

Next: Top female karaoke songs to sing with the girls

6. “I Love Rock ‘N Roll” by Joan Jett and the Blackhearts

Although we all saw Britney perform this song with her immense talent in the 2002 film Crossroads, this is one of those songs that takes nearly no effort to pull off. If your vibe is to feel like a rockstar and have everyone singing along with you, you’ll definitely want to add this hit to your karaoke repertoire.

This duet is incredibly easy to sing (either part), but it sounds impressive enough that you’ll look and sound like a pro when you take the stage. Bonus points if your partner can harmonize with you and bring your performance up a notch.

Next: Ultimate list of the best karaoke duets to sing

This romantic song is perfect for beginner karaoke singers because the lyrics are simple, the tempo is slow, and Colbie Caillat keeps her voice at a pretty even level throughout the entire song. Hop on stage and sing this song to your significant other to show them how much they mean to you.

Next: Love songs for him (our boyfriend dedication songs list)

Honestly, there are many Matchbox 20 songs that could go on this list. Rob Thomas has a voice that is gravelly enough that even the timidest of rock singers can match his tone, and the lyrics of this well-known song are simple enough that the audience will be singing right along with you.

10. “You’re the One That I Want” by Oliva Newton-John and John Travolta

Almost all of the songs from Grease are great karaoke songs, but “You’re the One That I Want” is the perfect song for a duo who is looking to sing something simple. Shimmy and shake your way through this hit, and you’ll have the room to their feet by the end of your performance.

You can’t have a karaoke night without this country classic. Garth Brooks’ low range means that almost anyone can sing this song and make it sound great. Even if you’re not out to raise hell, this is the ultimate drunk karaoke song—and you don’t even have to like country music. Bring your friends up on stage for the last chorus and have fun with it!

Next: Greatest karaoke songs for men to try out

Boy bands are a staple in karaoke setlists. Regardless of how well you sing, no one is going to notice because they’ll be singing these iconic lyrics right along with you. But if you happen to remember the dance routine you made up with your best friend in your living room, you’re sure to win some extra cheers.

This song is basically an American anthem, and it’s a karaoke must-sing. Sing it alone, or bring your friends up to sing with you. It doesn’t matter which—no one will be able to hear you over the sound of themselves singing the lyrics at the top of their lungs too.

Next: Greatest songs for baritone singers to try out

We recommend trying this classic from Johnny Cash at a whiskey bar – you’ll find that everyone will go crazy for it regardless of your singing abilities.

Next: Karaoke songs for deeper voices to sing

15. “Love is an Open Door” from Disney’s Frozen

There are so many Disney songs we could put on this list that they could honestly be their own list entirely. However, this cute duet is easy to sing and has great harmony between the two parts. If your go-to karaoke songs usually come from Disney movies, definitely consider adding this one to your repertoire.

This isn’t just the song of the summer. It’s shot its way up the charts and has quickly gained a spot as one of the most popular karaoke songs in recent memory. Hip-hop can sometimes be difficult for karaoke, but this song is a breeze. Bring your attitude to the stage, and you’ll be feeling yourself in no time. This song is perfect for a girls’ night, or if you just need a little confidence boost.

No karaoke night is complete without the queen of pop. Britney sings at a low enough octave that even poor singers can sing this song with confidence. And even if you can’t—karaoke is about fun, and it’s impossible to have a bad time while singing this pop classic.

This song is a fun duet that doesn’t involve a lot of voice work to make it sound good. Bring your sweetie up on stage and give your friends a performance that’s so cute that your friends will roll their eyes at you.

Next: Best girlfriend love songs (romance songs for her)

There are a lot of country songs that work well for karaoke, but this song is the ultimate bar song. Alan Jackson’s drawl makes this one of those easy songs to sing, and you probably won’t even make it to the first chorus before your friends are singing right along with you.

Although you have to wait until the middle of the song for the chorus and the tempo change, this classic rock hit is the nostalgia that you didn’t know you needed for your karaoke night.

Bruno Mars can be a tough act to replicate because—let’s face it—the guy has a set of pipes that cannot be matched. However, this song is more talking than singing, which makes it perfect for someone who tends to stick to easy karaoke songs.

Although this song is sung in a difficult octave, it’s also one of those easy songs to sing because most people just shout out the lyrics with reckless abandon. We recommend this song if you’re a few drinks in and aren’t sure you can compete with Celine Deon anymore.

This classic rock hit is another staple in any karaoke night setlist. Bon Jovi’s low voice makes it simple to sing, and the iconic lyrics are basically engrained in all of our memories. Choose this song, and you’ll bring the bar to their feet and liven up the room.

Next: Karaoke songs for tenors to belt out (our list)

This song is probably one of the easiest karaoke songs you could pick. The two verses are the exact same lyrics, and the lyrics are so iconic that your friends won’t be able to help but sing along with you. Channel some angst and rock out to this iconic 2004 hit.

If you’re looking for easy songs to sing, most of Johnny Cash’s songs would do well for you. We especially like this song because it’s upbeat and the lyrics are easy enough to follow. Paired with Cash’s low voice, you’ll crush this song no matter how you sing it.

Chris Martin might hit some higher notes that are out of your range in this song, but that almost doesn’t matter when it comes to karaoke. The more drink you’ve got in you, the more beautiful this song becomes. Don’t let the high octave intimidate you—this song is a classic.

27. “We Are Never Getting Back Together” by Taylor Swift

Most Taylor Swift songs are easy karaoke songs, but we especially love this one because it’s mostly talk-singing. The perfect middle finger to the person who wronged you, you’ll feel better after singing this angsty hit. And even if you’re not going through a breakup, this is a great song for a girls’ night.

Steven Tyler can hit some impressively high notes, but this song stays low enough that it’s pretty easy to sing if you don’t have the range. Sing this song to your sweetheart, or get up there and belt it out because you love it. Bonus points if you rock a Steven Tyler-esque outfit when you take the stage.

If you’re more of an entertainer than a singer, this is the song for you. A lot of rap lyrics are hard to keep up with, but this classic is slow-paced enough that it makes the perfect karaoke song. Shake that healthy butt, and the room will love you.

30. “Build Me Up Buttercup” by The Foundations

This soul classic doesn’t get enough love in karaoke bars these days, but it was once considered a must-sing on any karaoke outing. The tempo is manageable and the lyrics are iconic. You don’t need to be Adele to sing this song with confidence.

No karaoke night is complete without at least one song by the Beatles, and “Hey Jude” might just be the most iconic of them all. It might be a little on the long side (just over eight minutes), but this song makes a great finale to close out a night of fun, especially if you sing it with a group of friends!