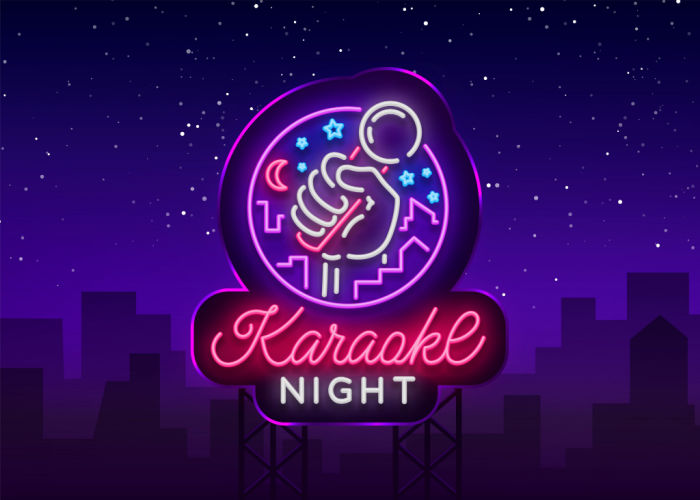 Sometimes you just have to drop your guard and give in to the magic of karaoke night. No need to wait until you’re a few drinks in and put on the spot to try to make your best selection. Here’s our list of the 40 best 2000s karaoke songs to help you make the most of your moment.

If karaoke is about cutting loose and having fun with it, you can’t do much better than this instant sugar-pop classic. The melody isn’t overly challenging, and if you’re lucky, people might even sing along.

Next: The best karaoke songs for women/females to sing

2. Since U Been Gone (Kelly Clarkson)

One of the most cathartic songs of the early 2000s, this post-breakup anthem celebrates reclaiming yourself from someone who probably didn’t deserve you in the first place. Turn that anger into karaoke magic.

If you can’t celebrate healthy breakup, celebrate what a bad idea it is to stay together and enjoy it while it lasts. There’s some challenging falsetto in the chorus, but everyone will probably be dancing too much to notice a missed note or two.

Next: Easiest karaoke songs to try to sing (our list)

This is easily one of the most compelling songs of the early 2000s. Its celebration of empowerment and personal dignity gives it impact emotionally as well as musically. It’s already been covered numerous times – why not add your voice as well?

In the mood for something uplifting but still wanna shake what your mama gave you? It’s impossible to hear (or sing) this one without moving all your best parts. No one else feel it for you – only you can let it out.

6. You Belong With Me (Taylor Swift)

Are there ANY Taylor Swift songs that don’t make great karaoke? We chose this one because it retains just a touch of Swift’s country roots while radiating pure pop yearning. Plus, it lends itself to such wonderful physical interpretation while you sing.

Next: The best alto songs to sing for auditions/karaoke (our list)

This one could easily make the list of best ‘00s karaoke songs in multiple categories. It feels old school yet still so very fresh, just waiting for the right woman (that would be you) to own it one more time.

You simply can’t go wrong with Gaga – especially with a friend or two at your side. The lyrics are about tainted love but the attitude is about fearlessness and strength, so don’t hold back with those monster claws!

It’s only appropriate you have your besties nearby when you suspect the one you love of being untrue. You’ll want to stay on top of the pace of these lyrics, but don’t worry – the chorus is always just around the corner to bring it all back together.

Next: The greatest ’80s karaoke songs list (try these out)

Another classic “good riddance” track that still feels so good. Come on – you gotta at least try to do the dance together… don’t you?

This one is sexy and seductive… without being too dirty. Perfect for teasing the guys then leaving with your BFFs instead! (Note that most karaoke versions simply omit the Snoop Dogg rap sections.)

Who says you can’t do socially conscious karaoke? This one is heavy on content but still grooves like a party song. You can do it alone, but it works best if you pass it around.

Isn’t this one kind of obvious? Of course it is! But in karaoke, that’s a huge advantage. Get your friends on stage and dive in; chances are good you’ll have plenty of help by the time you hit the chorus.

14. I Want It That Way (Backstreet Boys)

Sure, it’s a boy band – but 9 times out of 10, it’s going to be girls with the courage to bring the magic to this yearning, burning pop standard. And let’s be honest… you already know most of the moves.

This instant classic is naughty enough to be fun without actually offending anyone not named “Stacy.” Since its release in 2003 it’s been covered and parodied dozens of times. You can’t go wrong with Stacy’s Mom. (Er… the song, we mean.)

While the ladies often prefer celebrating their worth and potential, guys just can’t resist telling everyone how bad they are – and that they kinda enjoy it. This one is entirely singable by almost anyone, and the chorus is a total chest-bumper.

Next: Greatest karaoke songs for guys and men to sing

Most of us can’t look or dance like Timberlake, but if you can bring the attitude, this track will bring the sexy. If not, well… there are lots of other options on this list.

Definitely try this one out if you’re feeling like a bad boy on karaoke night. There are “clean” versions, but even without the language, this one is defiant and sexual and – you get the idea. So why is it on our list of best 2000s karaoke songs? Because it’s so fun to perform, of course!

19. I Write Sins Not Tragedies (Panic! At The Disco)

Anyone who’s ever been betrayed and tried to make the best of it can relate to this song. It’s alternative enough to appeal to non-karaoke fans while still letting you belt out plenty of angst and desire. What more could you ask?

20. She’s So Lovely (Scouting For Girls)

21. How You Remind Me (Nickelback)

Everyone can pretend they hate Nickelback, but there aren’t many songs better at voicing heartbreak and betrayal from the male perspective. If you’ve ever been hurt (and didn’t deserve it), this could be your moment to spin that pain into karaoke gold.

Sexy taunting with a legit R&B groove, but still perfectly manageable for anyone willing to throw themselves into it with a little confidence. Let your milkshake bring all the boys to the yard!

Feeling a bit tawdry and think you can almost rap? This one has been popular on karaoke night almost from before it was released, but it’s high risk – you’re either gonna win big or crash with a track like this. But everyone’s gonna like it when the beat goes da-na da-na…

Wanna make your audience feel old? Remind them this song was first released on MySpace – then dive into it with all the aching suave you can manage. This track has the advantage of being familiar without being obvious and also works with friends.

Next: Greatest 1970s karaoke songs list (try these out)

Let’s be honest – this one is slick, slow, and a little bit sappy. In other words, perfect for post-breakup karaoke. It’s not about being deep; it’s about feeling it, right? (Well, that and the easy-to-manage lyrics.)

This one is best with two singers, especially if at least one of you is already pretty strong on the lyrics. That said, this one could bring down the house if performed with energy and without fear. Love gone wrong and bitterness that grooves!

Of all the tracks included on our list of best ‘00s karaoke songs, this one comes closest to requiring actual rapping. That doesn’t mean you shouldn’t do it – quite the opposite. It means you gotta show them how it’s done. As long as you hit “low, low, low, low” each time, you’ll be great!

One of the most immediately recognizable tracks in the clubbing world, this one sounds harder to perform than it is. Like the original, it’s even better with a friend or two.

The 2001 revival of this 1970s hit by Labelle for the film Moulin Rouge! became an instant favorite for karaoke night and easily earns a place on any list of top karaoke songs. Share a verse or two with a friend, then butcher that French chorus together!

Originally an 80s hit for the much-underrated Talk Talk, No Doubt’s cover captured the energy of the original while making it both more danceable and more singable (if you don’t mind hitting a few high notes in the chorus).

This obscure track from Jesse Harris and the Ferdinandos became a massive hit for Jones in the early 2000s. It’s one of the few true ballads on this list, so if you feel like something sad, slow, and beautiful, this makes an excellent choice.

Originally by Katrina and the Waves (1983), this song has been covered more than almost anything else on this list (see below). Its iconic 2000s moment was on Glee when it was done as a mash-up with Beyonce’s “Halo.” Choose your own favorite cover and then make this one your own on karaoke night – solo, or with friends. It’s time to feel good!

Leonard Cohen first recorded this song in 1984, but over time it was covered and transformed by so many amazing artists that eventually no one even remembered the original. Oddly enough, it was in 2001’s Shrek that a whole new generation fell for this song. (John Cale did it in the film; Rufus Wainwright’s version is on the official soundtrack.) It’s pretty heavy for karaoke, but people still love it – so don’t let us stop you!

This hit for the Monkees in 1966 was actually penned by Neil Diamond. It found new life in 2001 when it was covered by Smash Mouth for the 2001 Shrek soundtrack – the second tune on this list from that movie. Are we sensing a theme?

35. Ain’t No Rest For The Wicked (Cage the Elephant)

A wonderfully defiant and catchy hit from 2008 that any audience will recognize as soon as it starts and all the other singers will wish they’d thought of first.

Familiar to most people without being an obvious choice for karaoke night. It’s not about love, sex, or positive self-esteem, but despite being released way back in 2003, it feels more topical now than ever.

Another very popular tune that’s been covered in a variety of styles by at least a dozen different artists. It’s in most karaoke libraries, but somehow no one ever sees it coming. Best of all, you’ll sound profound even though no one knows what it’s even about.

Punk rock without having to smash anything expensive at the end. You’ll have to decide whether or not to censor some of the language while you bring on that righteous anger, but this one rocks and in the right crowd could make you quite popular!

This was something of a sleeper hit, released in 2000 and eventually peaking in 2002. The combination of rap and hard rock wasn’t entirely new, but it was new enough and quickly became something everyone else tried to imitate. If you’d rather rock out than croon or groove, try this track.

There are several Weezer songs that lend themselves to amazing karaoke. We chose this one because it has the most straightforward structure and melody and can be done solo or with your friends as back up. Also, it’s just plain awesome in any setting.