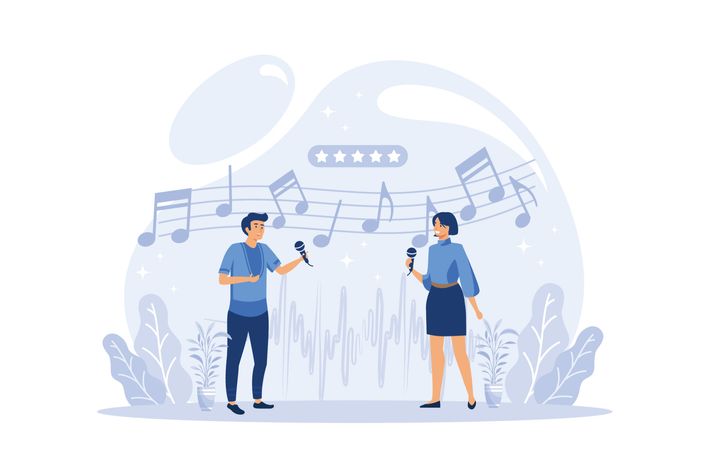 Choosing the perfect karaoke song is a challenge. It’s all about finding a song that’s fun, well suited to your voice, and one that also makes the crowd happy, too. But what about when you’re singing with a friend or partner?

In this article, we’ll list our top suggestions to help you choose the perfect duet for your next karaoke night!

1. Like I’m Gonna Lose You — Meghan Trainor and John Legend

Like I’m Gonna Lose You is a duet about loving someone while you’re with them, no matter what will come. This slow, sweet song perfectly blends two voices and this makes it an ideal starter song for your karaoke duets needs.

Next: The best karaoke songs in history (choose one of these)

Ed Sheeran first released Perfect as a solo track about his wife, then as a duet it gained prominence with Beyoncé. The song works perfectly (no pun intended) either way, and it is a perennial favorite among crowds of all kinds.

Next: Best karaoke songs for tenors to try out

P!nk and Nate Ruess of Fun. seemed like the least likely duo of all time, but their duet is sheer perfection. It just goes to show that different voices can blend beautifully if they have the right song.

Next: Easiest songs to sing for karaoke

4. Islands in the Stream — Dolly Parton and Kenny Rogers

Islands in the Stream might just be one of the most famous duets of all time. This gentle country song lets each singer showcase their range and then chorus in perfect harmony.

Next: Great songs for Sopranos to sing for karaoke and/or auditions

Ring of Fire was famously a solo piece, so why is it on our list of best karaoke duets? Because the chorus is fantastically easy to harmonize, resulting in a fun spin on the original.

Next: Greatest songs for men to sing for karaoke night

6. You’ve Got a Friend in Me — Randy Newman and Lyle Lovett

You’ve Got a Friend in Me was made famous by Toy Story. Unlike most duets, which tend to be romantic in subject, this one is all about friendship and can be sung by anyone.

Next: Top songs for baritones to sing for auditions/karaoke

The opening song from Grease is so infectiously fun, it’s almost impossible not to sing along to. The tune lets each singer have a turn in the spotlight with plenty of singing together, too.

Next: Top karaoke songs for alto singers to try out

8. Girl From the North Country — Bob Dylan and Johnny Cash

Girl From the North Country is the legacy of two musical legends. But don’t be afraid to step into those big shoes — at least not when it comes to karaoke night with a friend.

Next: Songs for deep voices to sing

Endless Love is a classic duet from two of the most famous singers of the 20th century. It’s good enough that it’s worth resurrecting whenever you get the chance, especially at karaoke!

Next: Top karaoke songs for low female voices to try

10. Come What May — Ewan MacGregor and Nicole Kidman

Come What May was famously featured in Baz Luhrman’s 2001 movie Moulin Rouge! It’s a powerful ballad about sticking with the person you love through thick and thin.

11. Start of Something New — Zac Efron and Vanessa Hudgens

Believe it or not, High School Musical came out all the way back in 2006. This song from Zac Efron and Vanessa Hudgens is a throwback classic.

12. Under Pressure — Queen and David Bowie

Titans of music come together in Under Pressure. For karaoke singers, that means that you’re bound to get the audience on its feet, whether they are Queen fans or Bowie stans.

You might get some tears flowing if you perform this song from Wiz Khalifa and Charlie Puth. The tune was written in honor of a late friend, and it really delivers on the emotion.

Next: The best funeral songs of all time (play these at a loved one’s funeral)

Talk about a song that will immediately take the energy up in any room. Ain’t No Mountain High Enough is the best kind of love song — positive, happy, and all about focusing on the good.

Next: Greatest love songs to dedicate to your boyfriend (our picks)

It wasn’t all that long ago that Señorita topped the charts, and it’s still a popular song today. It’s also incredibly fun and a bit sultry — perfect for karaoke night.

Released all the way back in 2002, Dilemma definitely qualifies as a throwback today. But it’s still a great karaoke pick and is bound to get the energy pumping!

You don’t have to be in New York to enjoy singing Jay-Z and Alicia Keys’ tribute to the Big Apple. This song is a dynamic performance no matter where you are.

Many karaoke duets are old classics, but some are more recent than others! HAIM’s Want You Back was released in 2017 and immediately became known as a karaoke favorite.

How about a duet for two guys? OK, it honestly doesn’t matter who gets on the stage — Shame is a banger no matter who you are.

20. Love the Way You Lie — Eminem and Rihanna

Do you or your friend know how to rap? You’ll make an amazing team performing Eminem’s duet with Rihanna, which seemed to be on every radio station back in 2010.

Next: Great mezzo-soprano songs to sing for any audition or karaoke night

Don’t Go Breaking My Heart might just be one of the most danceable duets of all time. It’s an incredibly fun song that is perfect for singers of all vocal ranges and abilities.

Zac Efron makes this list a second time thanks to his duet with Zendaya from The Greatest Showman. This song will give everyone a chance to flex their performing muscles.

23. You’re the One That I Want — John Travolta and Olivia Newton-John

Grease is full of fun duets, and You’re the One That I Want might be the best. Half love song, half silly gibberish, but all fun.

Next: Top funny songs to sing for karaoke night when you’re drunk

Phil Collins doesn’t miss, and Easy Lover is no exception. This song is perfect for two guys, but it sounds great no matter who gets up on the stage.

Rich Girl is a strange but fun smashup between the classic song from Fiddler on the Roof and early 2000s pop. It’s weird, but something about it works.

We won’t judge you for singing a Disney song at karaoke night. No matter how old you are, there’s no denying that Aladdin’s A Whole New World is a banger.

27. Dancing in the Street — David Bowie and Mick Jagger

It doesn’t get much better than David Bowie and Mick Jagger’s Dancing in the Street. We’ll give you bonus points if you can replicate some of their iconic dance moves.

Don’t Stop Believin’ wasn’t originally a duet until it was famously covered on the television show Glee. But it works either as a solo performance or a duet (and it is a crowd favorite!).

29. Somebody That I Used to Know — Gotye and Kimbra

Somebody That I Used to Know is an easy duet that is friendly to all vocal ranges. Back when it was first released, the song was on every radio station.

Feeling a little spicy with your choice of karaoke music? Marvin Gaye is about urging someone to let their inhibitions go and take the relationship to the next level.

Shallow might just be one of the most famous duets of the last few years. It catapulted to stardom after 2018’s “A Star is Born” and Lady Gaga’s electric live performance with Bradley Cooper.

32. Up Where We Belong — Joe Cocker and Jennifer Warnes

Even if you don’t know the whole song, you definitely know the chorus of this 80s duet: “Love lifts us up where we belong where eagles fly on a mountain high…”

Ebony and Ivory might just be one of the most famous duets of all time. It was first performed by musical legends Stevie Wonder and Paul McCartney, but we know that you’ll make it great in the karaoke bar, too.

City of Stars was first performed in 2016’s La La Land by Ryan Gosling and Emma Stone. That tragic love story made for some really amazing music — one that’s perfect for a night on the town.

35. Not While I’m Around — from Sweeney Todd

Musicals aren’t the first choice when it comes to karaoke songs. But this Sweeney Todd classic is good enough that it’s worth singing no matter where you are.

36. I Want it That Way — Backstreet Boys

I Want it That Way wasn’t originally a duet, but it works well as one. This is perfect if you have one person who prefers lead vocals and another who prefers to sing backup.

Next: The best 90s karaoke songs (our playlist)

37. Can’t Remember to Forget You — Rihanna and Shakira

Rihanna and Shakira in one dynamic duet? Yes please. If you’re ready to step into some big shoes, this 2014 hit is a fantastic choice.

Next: The best songs about missing someone deep down

Dua Lipa and Miley Cyrus made us all sing along to Prisoner in 2020. You can get the bar hopping with your own spin!

American Boy is a throwback to the early days of Kanye West’s career. It’s about a British woman falling in love with an American man.

We know the Beatles weren’t a duo, and in fact Let it Be was mostly a solo. But the song works perfectly for any number of singers and it’s an instant crowd pleaser.

Got a singer who can speak Spanish? Feel free to break out this sultry 2017 hit the next time you get behind the karaoke mic.

We know, we know, Elvis was a solo act. But this mournful love song is perfect as a duet (not to mention it’s within almost everyone’s range).

Want a song that’s fun and more about the energy than about the vocals? You can’t miss with Joan Jett’s classic I Love Rock n’ Roll.

Talk about a tearjerker. This mournful song about a lost love lets two voices blend seamlessly. There won’t be a dry eye in the house.

This song by The Proclaimers is about doing anything to get to the person you love. It’s almost impossible not to sing along to that exuberant chorus.