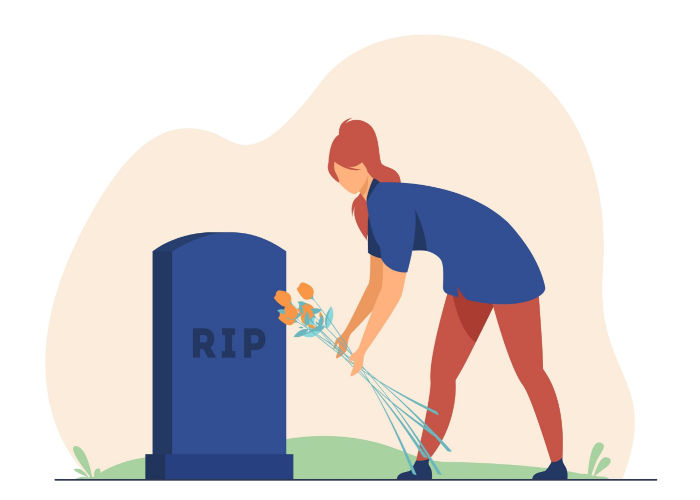 When it comes to death, people grieve in their own way. For musicians, many of them simply write songs about death. These 55 songs to grieve to will have you reaching for the tissues.

Taken from Ozzy Osbourne’s 1995 solo album Ozzmosis, “See You On The Other Side” finds the artist not saying “goodbye” to the deceased but instead saying “See you later.”

Next: The best songs for saying goodbye to friends and family

Released on Pennywise’s self-titled album, “Bro Hymn” was written in remembrance of former bassist Jason Thirsk’s friends Tim Colvin, Tom Nichols and Carlos Canton, who were lost early due to tragic accidents. Following Thirsk’s death in 1996, Pennywise re-recorded the song as “Bro Hymn Tribute.” This is a truly sad yet empowering track for fallen brothers.

Bob Dylan recorded “Knockin’ On Heavens Door” for the 1973 film Pat Garrett and Billy the Kid. The song has since become one of the artist’s most covered songs with acts such as Guns N Roses, Neil Young, and Avril Lavigne putting their own spin on it.

Next: The best funeral songs of all time

Avenged Sevenfold’s “I Won’t See You Tonight” is inspired by the real-life suicide attempt by former Avenged Sevenfold bassist Justin Sane. While Sane survived, the song is a morbid track for those who lost someone to suicide.

Taken from Killswitch Engage’s 2004 studio album The End of Heartache, “Rose of Sharyn” was written about a friend’s mother who passed away.

P!nk wrote “Who Knew” about their late friend, who passed away due to drug use.

Next: The best crush songs about catching feelings for someone

“People Who Died” by The Jim Carroll Band finds poet Jim Carroll discussing all of the people who’ve died in their life.

9. Emery – “Returning the Smile You Have Had From the Start”

Taken from Emery’s 2005 studio album The Question, “Returning the Smile You Have Had From the Start” finds vocalists Toby Morrell and Devin Shelton dreading their friend’s final moments by proclaiming, “This day will end with a life complete.”

Blue Öyster Cult’s “Don’t Fear The Reaper” is the band’s most memorable tune. The song deals with the inevitability of death and why we shouldn’t fear it at all.

Mariah Carey & Boyz II Men’s “One Sweet Day” was written in memory of several people they’ve lost, including C&C Music Factory’s David Cole. The song became one of the longest number-one singles of all time with 16 weeks at the top.

Next: The top love songs for him (romance tracks for boyfriends)

Kanye West recorded the song “Only One” in memory of his late mother Donda. For the track, West collaborated with Paul McCartney.

Next: The best funeral songs for mom of all time

Pearl Jam got the idea to record a cover Wayne Cochran’s “Last Kiss” after performing it live on tour. The song deals with a teen couple who were tragically killed in a car accident.

Mumford & Sons’ vocalist Marcus Mumford faced a heartbreaking moment as he sat by his grandmother’s side as she died. “Beloved” was written in memory of her.

Originally performed by Dionne Warwick, Michael Jackson’s “Gone Too Soon” is a tribute to the late pop star’s friend Ryan White, who passed away from an AIDS-related illness at the age of 18.

Following the death of rapper Christopher “The Notorious B.I.G.” Wallace, Puff Daddy paid tribute to their friend’s life with the song “I’ll Be Missing You,” which also features Wallace’s ex-wife Faith Evans and R&B group 112.

Next: Best songs about missing someone ever recorded

Taken from The Offspring’s 1997 studio album Ixnay on the Hombre, “Gone Away” was written about vocalist Dexter Holland’s ex-girlfriend, who died in a car crash.

Following the death of Snot vocalist James Lynn Strait, a slew of musicians came together for the 2000 tribute album Strait Up. Sevendust’s “Angel’s Son” was written in memory of the singer.

Bone Thugs-n-Harmony’s “Tha Crossroads,” which comes from their 1995 sophomore studio album E. 1999 Eternal, is dedicated to their late mentor Eazy-E, who died in 1995 from HIV.

Misery Signals’ “The Year Summer Ended in June” was inspired by the deaths of friends Jordan Wodehouse and Daniel Langlois, who were killed in a car accident while touring with their band Compromise.

Death Cab For Cutie vocalist Ben Gibbard wrote “I Will Follow You Into The Dark” after thinking more about death.

Christina Aguilera’s “Hurt” was inspired by the loss of Linda Perry’s father. Perry, who produced the song, suggested recording a song about loss for Aguilera’s 2006 studio album Back to Basics.

Written for the hit 1997 film Titanic, Celine Dion’s “My Heart Will Go On” finds the subject mourning the loss while knowing their memories together will never disappear.

Set Your Goals’ “Echoes,” which stems from their 2006 debut album Mutiny deals with overcoming a tragic loss with lyrics such as “And I will keep pieces of you alive in me, your spirit carries on)”.

In 2005, Armor For Sleep unveiled What to Do When You Are Dead, which is a concept album about a person’s suicide and its aftermath. “The Truth About Heaven” is a mournful song finding the deceased crooning, “Don’t believe that the weather is perfect the day that you die.”

The Smiths’ classic tune “There Is A Light That Never Goes Out” finds the subject having thoughts of dying in a car crash with their friend.

Hip hop artist NF wrote “How Could You Leave Us?” about his mother’s death following a downward spiral with drug addiction.

Sleigh Bells’ 2012 studio album Reign of Terror revolved around the passing of guitarist Derek E. Miller’s father from a motorcycle accident. “End of the Line” finds Miller saying goodbye to their father in a melancholy way.

In 2005, emo rock band Bayside faced tragedy when former drummer John “Beatz” Holohan was killed in a van accident on tour. The band released the song “Winter” in memory of their fallen bandmate.

Following the death of their father, Neck Deep vocalist Ben Barlow wrote the track “19 Seventy Sumthin'”. The song, which is from Neck Deep’s 2017 studio album The Peace and the Panic, paid tribute to Barlow’s father by chronicling how their parents met to their father’s death.

Fast & Furious fans couldn’t believe the news when Paul Walker died in a 2013 car accident. For Furious 7, Wiz Khalifa and Charlie Puth joined forces for a song in honor of the beloved actor.

Smokey Robinson wrote “Really Gonna Miss You” in memory of former Temptations member Melvin Franklin, who passed away in 1995. Robinson would sing the song at Aretha Franklin’s funeral in 2018.

Naughty by Nature paid tribute to deceased hip hop artist Tupac with the song “Mourn You Til I Join You,” which is from the Ride soundtrack.

Hard rock band Pop Evil delivered one of their most emotional songs yet with “Torn To Pieces,” which is from their 2013 studio album Onyx. Vocalist Leigh Kakaty wrote the song in memory of their father. In a statement, Kakaty said, “There’s nothing more haunting and torturous to the human soul than the feeling of losing someone close to you without saying goodbye.”

Funeral For A Friend vocalist Matthew Davies-Kreye paid homage to their late friends Lianne Davies and Lloyd Bird with the song “Roses For The Dead.”

Being on tour means being away from people during critical moments. The Gaslight Anthem paid homage to a friend who passed away while they were on the road with “The 59 Sound” from their 2008 album of the same name.

Opening with the line, “You don’t worry about tomorrow anymore because you’re dead,” Against Me’s “Dead Friend” is a severe punch to the gut for those mourning loved ones. Vocalist Laura Jane Grace wrote the song about their deceased friend Pope, who died following an accident on tour with the band.

Losing a child is something no parent wants to experience. Singer Eric Clapton suffered immense loss when their four-year-old son Conor died from falling out a window. Clapton wrote the song “Tears In Heaven” in celebration of their child’s life.

Danny Gokey wrote “I Will Not Say Goodbye” to show that you don’t have to say goodbye after someone’s gone right away. Everyone mourns in their own way.

While working on their studio album Divide, Ed Sheeran faced tragedy when their grandmother passed away. Sheeran wrote the song “Supermarket Flowers” and performed it at their funeral. At their grandfather’s suggestion, Sheeran recorded the tune and placed it on the album.

44. Alan Jackson – “Where Were You (When the World Stopped Turning)”

September 11, 2001 is a date marred by tragedy. Alan Jackson wrote the song “Where Were You (When the World Stopped Turning)” to showcase their feelings towards the horrid day where nearly 3,000 died in a terrorist attack in NYC.

45. Luther Vandross – “Dance With My Father”

Luther Vandross wrote “Dance With My Father” about his experiences dancing with his father as a kid. The song was recorded in memory of Vandross’ father, who passed away when Luther was eight-years-old. This would be Vandross’ final Top 40 hit before the singer passed away in 2005 from a heart attack.

Bruce Springsteen wrote “The Last Carnival” in memory of late E. Street Band founding member Danny “Phantom” Federici, who passed away in 2008. Prior to Springsteen’s successful solo career, the artist played with Federici in the band Child.

Martina McBride tackles the tough subject of death at the hands of child abuse with “Concrete Angel.”

Released in 2009, Rascal Flatts’ “Why” is one of the toughest songs the band had to write. The song follows a heartbroken man who finds out their friend committed suicide. All members of Rascal Flatts found themselves losing someone to suicide prior to writing the track.

Rod Stewart wrote “The Killing of Georgie” about their friend Georgie, who was killed by a group of thieves in NYC.

While falling ill to cancer, Warren Zevon wrote a farewell tune for friends and family with “Keep Me In Your Heart,” which is on their 2003 studio album The Wind. Zevon would pass away two weeks after the album was released.

52. Steve Wariner – “Holes in the Floor of Heaven”

Steve Wariner’s “Holes in the Floor of Heaven” tells the morbid story of a man who lost both their grandmother and their wife.

3 Doors Down originally wrote “Here Without You” about missing their significant other on tour. When the WWE used the track for a video about the passing of professional wrestler Eddie Guerrero, the song took on a whole new meaning for listeners.

Taken from Avril Lavigne’s 2004 studio album Under My Skin, “Slipped Away” is about the singer’s grandfather, who passed away while the singer was on tour. When they heard the news, Lavigne nearly cancelled their performance that night.

Don McLean was inspired to write “American Pie” following the deaths of Buddy Holly, Jiles Perry Richardson Jr.  a.k.a. The Big Bopper, and Ritchie Valens in a plane crash.

Death is one of the most certain yet uncertain things ever. It can come at any time, and there’s nothing you can do about it. Fortunately, there will always music to help get you through the grieving process.